Macon’s Soapbox Derby Makes its Mark as a Regional Success

Straight off the heels of the Cherry Blossom Festival, what signature spring event brings speed, STEM and thousands of spectators to Macon’s Magnolia Street?

That would be Macon’s other event in full bloom: The Magnolia Soapbox Derby. The annual race celebrated its ninth anniversary on April 8, where around 5,000 people gathered to watch 52 competitors vie for the fastest and most creative soapbox cars in four separate categories. The event that went from a neighborhood block party has now earned a regional reputation for soapbox racing – and creating a strong sense of place and pride for Macon residents and racers, alike.

Macon’s Soapbox Derby has had several iterations. The first derby was held in 1936, when winner Herman Brown was sent to Akron, Ohio, for the All American Soap Box Derby Race. In 1946, the race drew more than 25,000 spectators to Emery Highway.

The most recent version of the Derby kicked off in 2009, when a creative group of locals decided to bring the race back to Macon. This time, the derby (in conjunction with the College Hill Corridor project), gave adult speed demons an opportunity to race their creations down Magnolia Street hill, where 300 people lined the street to watch three cars compete.

Nine years later, the Magnolia Soapbox Derby is one of Macon’s premiere events, according to Derby Co-Chair Chris Tsavatewa.

This year’s race day consisted of four heats: The Professional Class, which is designated for the most serious racers; the Shadetree Race, which features creative grassroots project cars constructed by friends, families and organizations; the Gravity Racing Challenge, which gives high school students the opportunity to race while learning STEM; and the Big Wheel Challenge for the youngest racers.

The Gravity Racing Challenge is the most recent addition to the Derby made possible by a 2014 Knight Foundation grant. The race focuses specifically on STEM (Science, Technology, Engineering, and Math) and is offered in partnership with the All American Soapbox Derby. Each team is provided a car kit to use for the race. “We are really proud that we can bring the racetrack to the classroom and back,” Tsavatewa said.

Like the Cherry Blossom Festival and Bragg Jam, The Magnolia Soapbox Derby is doing its job of bringing the community together and instilling a sense of place and pride in what Macon has to offer. “Soapbox Saturday” is now part of Macon culture and a can’t-miss event.

“It really is a manifestation of the community engagement and commitment to a creative and unifying event,” Tsavatewa said. “I would say that the culture of a community can be referenced by its calendar. You have things on a calendar that stand out year after year where people say ‘you’ve got to go to that thing.’ The Magnolia Soapbox Derby is one of those things.”

The Magnolia Soapbox Derby is held each spring along Magnolia Street at Washington Park. Next year, the race and street festival will celebrate the 10th anniversary of its rebirth. For more information about the Derby, including ways to participate, visit www.magnoliaderby.com. 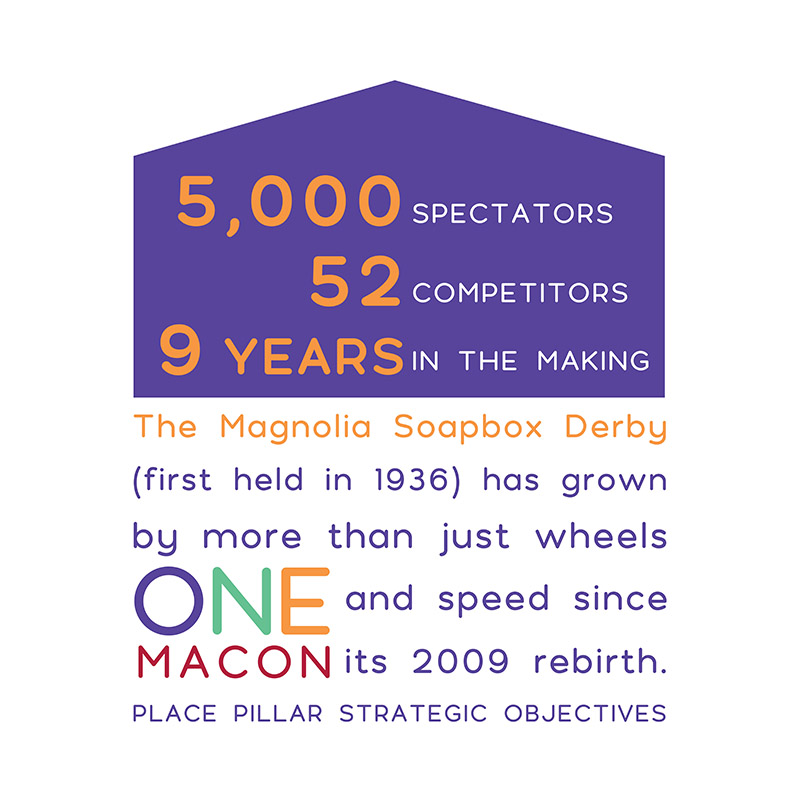