A weeklong project in November 2016 encouraging residents to bike-commute around town has received international recognition from the Center for Active Design (CfAD). One of seven global winners of this year’s Excellence Awards, Macon Connects joins winners from as far away as Austria, Italy and New York.

“Winning projects illustrate how an emphasis on physical, mental and social wellbeing can be achieved — through shifts in regional policies, grassroots advocacy campaigns, and the leveraging of health-promoting design as a key market differentiator,” according to a CfAD news release.

Josh Rogers, president and CEO of NewTown Macon, said the CfAD award “brings national attention to Macon’s revitalization efforts and is inspiration to connect all our neighborhoods with safe places to walk and bike.”

It all started in 2016 with a Knight Foundation grant of $151,900 to improve connectivity in Macon.

“Macon Connects received funding as a 2016 winner of the Knight Cities Challenge, an open challenge that asked innovators to submit ideas that make cities more successful. It received $151,900 as one of 37 winners of the challenge chosen among more than 4,500 applicants,” said Lynn Murphey, Knight Foundation program director for Macon. “In the case of Macon Connects, the project was chosen because of its focus on increasing city vibrancy and connecting residents to place, by allowing them to explore their city safely on foot or on bicycles.”

From its inception, Macon Connects set out to prove that “the only thing that gets people to ride bikes is when there are safe, easy connections among places people want to be,” Rogers said. “With the pop-up lanes, we were able to definitively prove that if you install bike lanes, 10 times as many people will ride bikes.”

And ride they did. Last November, Macon Connects installed the world’s largest network of bike lanes and left it up for two weeks to let people try it out. The results of the project were staggering.

According to the Macon Connects website, there were 9.5 times as many bikes along the pop-up network during the event than during a normal week, where no bike infrastructure is present – an 854 percent increase. Of the folks who rode bikes during the pop-up event, 88 percent said it encouraged them to bike more, and 71 percent said they support building a protected bike network in Macon.

What do those numbers mean for the future? Based on the success of the initiative, Macon has already installed the city’s first mile-long bike lane, and is aiming to complete a second multi-neighborhood connection later this summer.

Murphey said that CfAD’s recognition of this initiative “puts Macon on a global stage for sharing best practices in building the kinds of communities where people want to live and to work.” 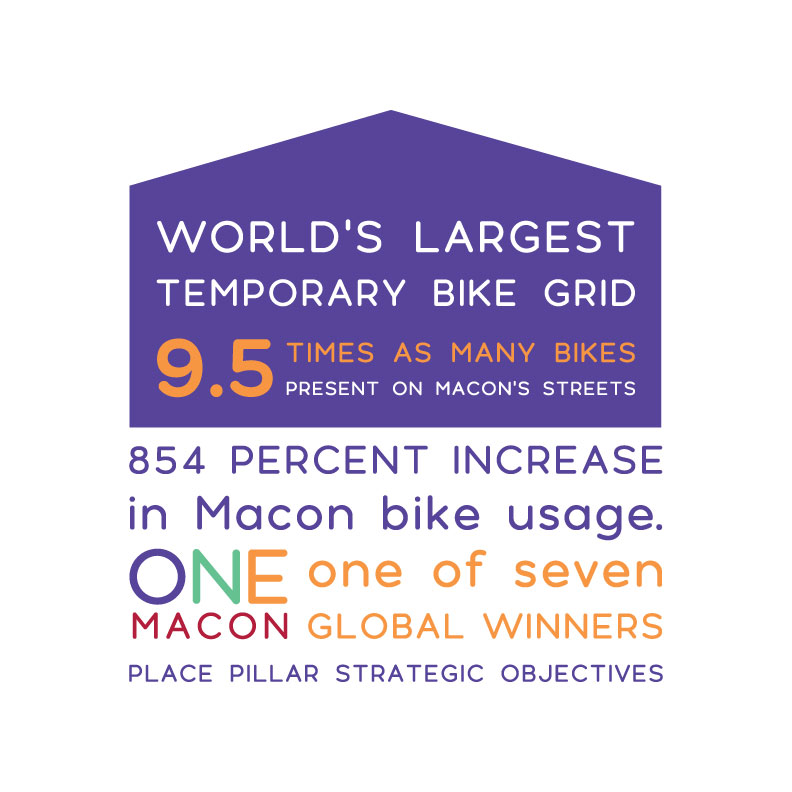