Without a doubt, the Historic Macon Foundation is making strides toward saving endangered, historic properties in Macon-Bibb County. For the last three years, HMF has designated five properties each year to its Fading Five list. From a total of nine properties, six have been declared “saved,” creating a 65 percent success rate.

“A property is declared ‘saved’ once it is no longer under threat, whether that be threat of demolition or demolition by neglect,” said Ethiel Garlington, HMF executive director. “When a property has been purchased for restoration it is considered saved.”

On Aug. 29, HMF announced its third Fading Five list. HMF’s preservation committee culled through more than 20 nominations to select 2017’s Fading Five. For each of the properties on the list, HMF creates strategic preservation plans and works creatively with property owners, local leaders and supporters to find preservation solutions. Properties remain on the list until the place is no longer under threat.

Train Recreation Center, 716 Oglethorpe St.: In danger of demolition by neglect. Although the large hole in the roof has been covered with a tarp, the entire structure is suffering from neglect

Guy E. Paine House, 2733 Hillcrest Ave.: Heavily overgrown and shows signs of neglect. The solution for this property is purchase and rehabilitation by a sensitive new owner.

A.E. Barnes Duplexes, 862 and 864 Spring St.: Pending demolition. In June, the Hospital Authority offered the buildings and a nearby lot to HMF if the group could move the houses by March 2018. Sadly, given the impracticality and high cost ($100,000 per house) of relocating the masonry duplexes, HMF hopes to pursue other options.

Bobby Jones Performing Arts Center, 1389 Jefferson St.: In danger of demolition by neglect. This year marks the centennial of this building that was originally built as the First Congregational Church. The building has always been a center for education for the Pleasant Hill Community.

Cotton Avenue District: HMF plans to advocate for stricter zoning regulations regarding demolition in this area. Also, HMF will continue to support the grassroots Cotton Avenue Coalition, and its work to encourage the respectful growth of this district.

For more than 50 years, HMF has helped preserve hundreds of historic buildings in Macon-Bibb County. Thanks to the generosity of the 1772 Foundation and the Community Foundation of Central Georgia, HMF now has a revolving fund, called the Fading Five Fund, dedicated specifically to preserving endangered places.

“The Fading Five Fund offers Historic Macon the resources needed to market Fading Five properties to potential buyers/savers and also affords us the opportunity to potentially save a property ourselves – like the Ware House – without dipping into the funds needed to maintain our organization’s operation and mission,” Garlington said.

Since 2003, HMF has completed nearly 150 houses and kept 25,000 tons of debris out of the landfill. Just since 2014 they’ve attracted $5.8M in investments in their target neighborhood of Beall’s Hill, according to their website.

“We continue to be amazed at the results of the Fading Five initiative and are eager to collaborate with the community to find solutions for the 2017 places,” Garlington said. “We hope citizens will get involved with our preservation committee, which works year-round to develop strategies for these unique places.”

Get involved with HMF by becoming a member or volunteer at events such at the annual Flea Market, which is happening Nov. 3-5. Learn more about HMF at historicmacon.org. 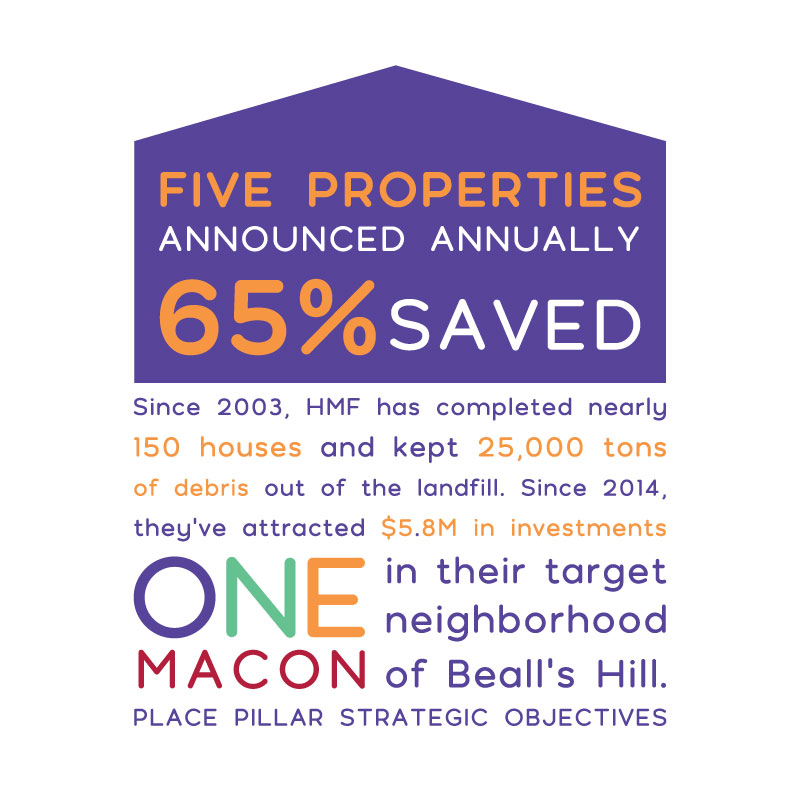